Using bacteria to kill bacteria as a “living antibiotic”

A naturally occurring predatory bacterium can work with the immune system to clear multi-drug resistant Shigella infections in zebrafish.

It is the first time the predatory bacterium Bdellovibrio bacteriovorus has been successfully used as an injected anti-bacterial therapy and represents an important step in the fight against drug-resistant infections, or ‘superbugs’.

Shigella infection is responsible for over 160 million illnesses and over 1 million deaths every year – and is a common cause of ‘travellers’ diarrhoea.’ Cases of drug-resistant Shigella are also on the rise as, although the diarrhoea usually clears up without treatment, antibiotics are often used even in mild cases to stop the diarrhoea faster. Resistance to antibiotics has prompted a team of researchers from Imperial College London and Nottingham University to look to the natural environment for creative solutions to this problem.

‘PREDATORY ACTION’ – ABOUT THE STUDY

To investigate Bdellovibrio’s ability to control drug resistant Gram-negative infections, researchers injected zebrafish larvae with a lethal dose of Shigella flexneri strain M90T which is resistant to both streptomycin and carbenicillin antibiotics. Bdellovibrio was then injected into the larvae’s infection site, and a decrease in the number of Shigella was seen. In the absence of Bdellovibrio, zebrafish were unable to control the replication of Shigella and levels of the bacteria rose.

Co-lead author Dr Serge Mostowy from the Department of Medicine at from Imperial College London said: “This study really shows what a unique and interesting bacterium Bdellovibrio is as it presents this amazing natural synergy with the immune system and persists just long enough to kill prey bacteria before being naturally cleared. It’s an important milestone in research into the use of a living antibiotic that could be used in animals and humans.” 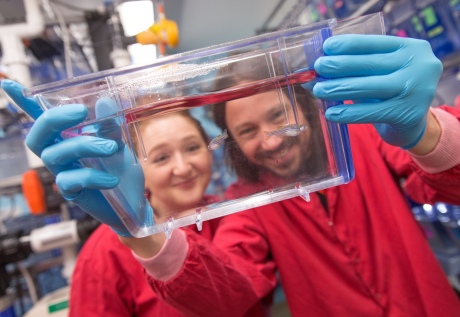 Dr Alex Willis and Dr Serge Mostowy with their zebrafish

Bdellovibrio can invade and kill a range of Gram-negative bacteria, such as E. coli and Salmonella, in the natural environment. Previous research has shown that it can reduce pathogen numbers in the stomach of chickens when taken as an oral therapy, but there is growing need to develop therapies to target infections in wounds and organs. Successful use of Bdellovibrio highlights its potential uses in tackling a range of drug-resistant Gram-negative bacterial infections that can develop in hospital patients.

Dr Mostowy and co-lead author Dr Alex Willis from the Department of Medicine at Imperial said: “The urgent requirement for new antimicrobials calls for increasingly creative solutions. The zebrafish has been a fantastic model for us to generate rapid understanding of how a living antibiotic can work in an animal. Our findings here provide the basis for testing Bdellovibrio in higher vertebrates and ultimately, humans.

“The translucent zebrafish facilitates powerful microscopy that enables striking understanding more difficult to achieve using other animal models. Being able to visualise the infection as well as the predatory bacteria and host immune cells has been invaluable in helping us understand how Bdellovibrio can function in an animal.”

Professor Liz Sockett, co-lead author from The University of Nottingham said: “This has been a truly ground-breaking collaboration that shows therapeutic Bdellovibrio in action inside the translucent living zebrafish. The predatory action of the Bdellovibrio breaks the Shigella-pathogen cells and this stimulates the white blood cells; redoubling their ‘efforts’ against the pathogen and leading to increased survival of the zebrafish ‘patients’.”

Remarkably, Bdellovibrio is also able to reduce pathogen load in immunocompromised zebrafish larvae that have been depleted of white blood cells. However, survival is significantly greater in immune-competent zebrafish, showing that Bdellovibrio’s maximum therapeutic benefit comes from its ability to work cooperatively with the host’s own immune system.

Dr Michael Chew, Science Portfolio Advisor at Wellcome said: “It may be unusual to use a bacterium to get rid of another, but in the light of the looming threat from drug resistant infections the potential of beneficial bacteria-animal interactions should not be overlooked. We are increasingly relying on last line antibiotics, and this innovative study demonstrates how predatory bacteria could be an important additional tool to drugs in the fight against resistance.”

Learn more: Scientists harness the power of predatory bacteria as a ‘living antibiotic’

The Latest on: Living antibiotic

The Latest on: Living antibiotic

A Star in a Bottle: The Quest for Commercial Fusion