Team Tracks a Food Supply at the End of the World 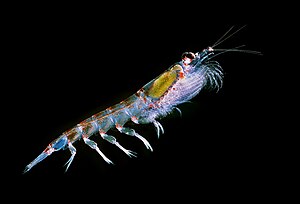 One recent morning at the bottom of the world, Kim Bernard spotted two humpback whales gorging in the Southern Ocean not far offshore. Dr. Bernard, a biological oceanographer, was spending the austral summer at Palmer Station, the United States research outpost on an outcropping off the western Antarctic Peninsula.

Dr. Bernard and her team, known at Palmer as “The Psycho Krillers,” are studying the feeding patterns of Antarctic krill, the small, bug-eyed shrimplike crustaceans that are the central diet for whales, penguins, seals and seabirds. She is one of a growing number of scientists concerned about the effects of a kind of gold rush, as fishing companies race to the Southern Ocean to catch krill and turn it into animal feed and lucrative omega-3 dietary supplements.

The former Soviet Union began fishing krill in the ocean in the 1960s, but it was not until the 1990s that Luc Rainville, a graduate student at the University of Victoria in British Columbia, discovered that the omega-3 fatty acids in Antarctic krill were readily absorbed by the human body. In 2002 he helped found a company, Neptune Biotechnologies and Bioresources, to bring krill oil to the market as a supplement.

The annual krill harvest is still well within the limits set by the Convention on the Conservation of Antarctic Marine Living Resources, which regulates fishing in the Southern Ocean. Some scientists say the Antarctic krill fishery is the world’s most underexploited marine resource.

But fishing is not the only threat to the krill population. The creatures, especially in their larval and juvenile stages, feed on algae that live on the underside of sea ice — which is retreating as the climate warms.

And while no one argues that Antarctic krill are currently threatened or overfished, scientists and environmental groups fear that as more companies deploy more vessels — especially huge factory ships — fishing and climate change could prove a double blow to krill and the delicate Antarctic food web that depends on them.

“I’m not worried at current levels of the fishing effort,” said Deborah K. Steinberg, a biological oceanographer at the Virginia Institute of Marine Science in Gloucester Point who oversees Dr. Bernard’s krill research at Palmer Station. “But I do worry about the future if the industry really starts to take off. We have to keep a close eye on it.”

The western Antarctic Peninsula is warming faster than most of the rest of the earth. Winter temperatures have shot up roughly 11 degrees Fahrenheit over the past 60 years, reducing sea ice cover. Those and other effects of climate change have caused Antarctic krill populations to plummet 40 to 80 percent in the last three decades around the South Shetland Islands near the tip of the peninsula, according to research published last May in The Proceedings of the National Academy of Sciences.

The research, led by Wayne Z. Trivelpiece of the National Oceanic and Atmospheric Administration, also showed that populations of Adélie and chinstrap penguins, which rely heavily on krill, declined more than 50 percent in the northern peninsula, where krill fishing vessels concentrate.

Bookmark this page for “Antarctic krill” and check back regularly as these articles update on a very frequent basis. The view is set to “news”. Try clicking on “video” and “2” for more articles.