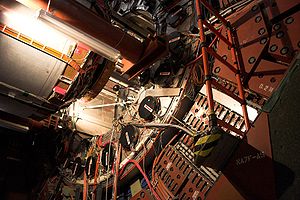 Researchers working at the U.S. Department of Energy’s (DOE) SLAC National Accelerator Laboratory have used the world’s most powerful X-ray laser to create and probe a 2-million-degree piece of matter in a controlled way for the first time. This feat, reported in Nature, takes scientists a significant step forward in understanding the most extreme matter found in the hearts of stars and giant planets, and could help experiments aimed at recreating the nuclear fusion process that powers the sun.

The experiments were carried out at SLAC’s Linac Coherent Light Source (LCLS), whose rapid-fire laser pulses are a billion times brighter than those of any X-ray source before it. Scientists used those pulses to flash-heat a tiny piece of aluminum foil, creating what is known as “hot dense matter,” and took the temperature of this solid plasma — about 2 million degrees Celsius. The whole process took less than a trillionth of a second.

“The LCLS X-ray laser is a truly remarkable machine,” said Sam Vinko, a postdoctoral researcher at Oxford University and the paper’s lead author. “Making extremely hot, dense matter is important scientifically if we are ultimately to understand the conditions that exist inside stars and at the center of giant planets within our own solar system and beyond.”

Bookmark this page for “nuclear fusion” and check back regularly as these articles update on a frequent basis. The view is set to “news”. Try clicking on “video” and “2” for more articles.