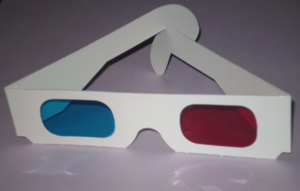 Three-dimensional television got a major marketing push nearly two years ago from the consumer electronics and entertainment industries, yet the technology has one major limitation: viewers need special eyeglasses to experience the 3-D effect. Now the marketing experts say that the technology will never catch on in a big way unless viewers can toss the glasses entirely.

Although 3-D technology sans specs is available for small screens on smartphones and portable gaming devices, these devices use backlit LCDs, which can be a big battery drain and limits how small the gadgets can be made. More recently, researchers have begun to use light-emitting diodes, which show more promise. They are developing autostereoscopic 3-D using tiny prisms that would render 3-D images without glasses. Because these LEDs get their lighting from organic compounds that glow in response to electric current, they can be thinner, lighter and more flexible than LCDs. The innovation is detailed in the August issue of the journal Nature Communications.

The researchers—from Seoul National University, Act Company and Minuta Technology—used an array of microscale prisms placed on a screen to create a filter that guides the light in one direction or another. Using such a prism array—which the researchers refer to as a Lucius prism after the Latin name meaning “shining and bright”—they were able to display an object on the screen that could be seen only when viewed from a particular angle. By manipulating the intensity of light, the scientists could show from the same screen two distinctly different images—one to a viewer’s left eye and a second to the right eye. Seeing the two images together creates a sense of depth that the brain perceives as 3-D—all without the help of special lenses.

Bookmark this page for “3-D” and check back regularly as these articles update on a very frequent basis. The view is set to “news”. Try clicking on “video” and “2” for more articles.