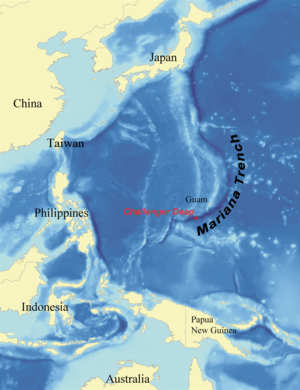 Seventy percent of Mother Earth’s surface is covered in water, yet we know more about the moon than we do about our deepest oceans.

In yet another ground-breaking initiative under Virgin’s multi-faceted “Branded Venture Capitalism”, Richard Branson intends to change all that with the Virgin Oceanic Five Dives project.

The project is a series of ocean expeditions to the bottom of the five deepest trenches in the world, beginning with an attempt on the world record 35,911 foot dive to the Pacific Ocean’s Mariana Trench – the deepest point on earth.

The dives will be performed using the Hawkes experimental prototype DeepFlight Challenger submersible – a submarine more akin to an aircraft in the way it maneuvers than a traditional submarine because it glides on wings and used positive bouyancy. Constructed of extremely strong lightweight materials such as titanium and carbon fiber and quartz, the DeepFlight Challenger submarine will need to resist 1,000 atmospheres as it plumbs the lowest points on earth.

Each of the five dives will be the world’s first solo dive to the bottom of the five oceans: