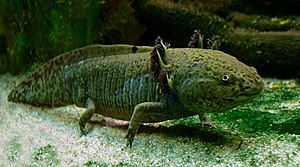 Last week, the science community was set a-buzz with a new study that showcased the unique relationship between salamanders and algae.

The research, done by Ryan Kerney at Dalhousie University in Halifax, Canada, found that spotted salamander tissues contained algae embedded within them. The exact purpose of this relationship (which begins when the salamanders are only embryos) is not yet known, and the jury is still out if it is truly a symbiotic relationship or tends towards mutualism.

An area of research related to that done by Kerney et al. is one that has so far managed to stay out of reach: cellular regeneration.

True cellular regeneration is known as the “Holy Grail” of scientific and medical research – the ability to regenerate cells, tissues and organs without the need of transplants.

True regeneration is not yet possible in humans, according to Prof. Stephane Roy at the University of Montreal, who is looking at tissue regeneration in vertebrates. Since humans have such a limited ability to regenerate, restricted to our livers and skin, Roy had to find an alternative method to study this evolutionary marvel.

Not your average animal

The axolotl is a Urodele amphibian, which includes all newts and salamanders. However, unlike the others that leave the water once they are sexually mature, the axolotl stays solely aquatic.

In addition to its regenerative capacity, the axolotl is also a perfect model organism for a feature known as neoteny, where an animal maintains all its juvenile characteristics, such as external gills, despite reaching sexual maturity. This gives them the appearance of wearing an elaborately feathered headdress on the side of their heads, which along with their small lidless black eyes and wide head, guarantees that you will never see an animal quite like them again.

Whereas all Urodele amphibians possess some capacity for regeneration, the axolotl is one-of-a-kind. It can regenerate multiple structures like limbs, jaws, tail, spinal cord, skin and more without evidence of scarring throughout their lives. Axolotls can even receive transplanted organs from other individuals and accept them without rejection.

Sadly, it is listed as being critically endangered by the International Union for the Conservation of Nature and Natural Resources (IUCN) because it is only naturally located in one lake in Mexico, Lake Xochimilco. But, due to its amazing regenerative capacity, the axolotl is in captivity all over the word for medical research or the pet trade.

“We must do what we can for this amazing animal,” says Roy, whose lab is one of the few in the world doing this type of research. If successful, it has the potential to help millions of people suffering from severe burns, loss of limbs, and even cancer.