The Latest
Home Innovation Do It Yourself, or With the Help of Tinkerers Everywhere

Do It Yourself, or With the Help of Tinkerers Everywhere 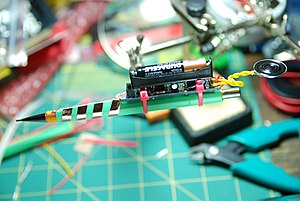 HANDS-ON kits offer great ways to learn about science and engineering. But the joys of making a small robot or a crystal radio set have long eluded those who can’t get past Step 2 in the instruction manual.

But now, even those without a wisp of natural geek in them may have a chance at success. That’s because Web-based instructions — often designed by hobbyists for other hobbyists — are now supplementing the often-confounding printed directions that come with such kits.

Bloggers who tinker are creating interactive tutorials, descriptive videos and step-by-step series of photographs that make it easier for nontechies to go forward confidently. Dozens of do-it-yourself Web sites, like Evil Mad Scientist, AdaFruit and iFixIt, also offer tools, components and kits of their own, many aimed at beginners.

Dale Dougherty, editor and publisher of Make magazine, which sells kits as well as related books and tools at the Maker Shed store on its Web site, says a new era is opening for people who want to create things. “There have always been tinkerers,” he said. “But today it’s a lot easier for others to join in. We’ve moved from the lonely tinkerer to the social tinkerer who can share ideas.”

Those tinkerers might once have worked alone in their garages, Mr. Dougherty said, but now many offer blogs about their projects, documenting them and opening up the details to their readers. Online communities have sprung up in which people help one another, adapting and explaining the instructions so they are clear even to novices. Some people also try to commercialize their gadgets and inventions, he said, “but many, even most, are happy validating their ideas through the community.”

Scott Heimendinger, who blogs about food at seattlefoodgeek.com, created a popular set of online instructions after he made a sous vide immersion cooker for $75 by using off-the-shelf components, rather than buying one for $1,200, the going price two years ago for the model he wanted. The appliance is used to slowly cook food sealed in plastic and immersed in water at precisely controlled temperatures.

To illustrate the steps in building the cooker, he took photographs with his digital camera, with the help of a tripod. He used his right hand to illustrate a step, while hitting the shutter release on the camera with the left. He could then use as many shots as he needed without worrying about printing costs.

“With every photo, you add information,” he said. “And people following the instructions can be confident they are building in the right way. This takes away a lot of the ambiguity.”