The Latest
Home Innovation Anti-smog buildings could be the future, as pollution soars

Anti-smog buildings could be the future, as pollution soars 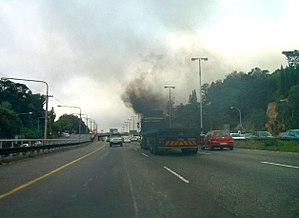 As health officials assessed the impact of potentially dangerous levels of smog across the country at the start of the weekend, an invention that turns buildings into pollution-absorbing “sponges” could offer help in the future.

High levels of pollution are expected to affect much of Britain, according to officials from the Department for Environment, Food and Rural Affairs, with London, Yorkshire, and the east, south-east and north-west of England all forecast to be badly hit.

The latest smog means the UK could face punishment for breaking EU air-pollution regulations. Recent smog alerts have put Britain over its annual limit for daily pollution. As the guidelines become legally binding in Britain in June, experts believe the UK could soon face court action.

Dr Frank Kelly, professor of environmental health at King’s College London, said: “We’ve now had seven consecutive days of high or very high pollution in London, which we haven’t seen since the heatwave in 2003. Britain was given an extension to meet EU limits for air pollution but it runs out on 11 June, leaving the UK vulnerable to being taken through the European courts. We’re in the middle of the bank holiday, the weather is going to continue to be unseasonably warm, and with all the added traffic we’re expecting to see at least another two to three days of this.”

Health experts warned yesterday that asthma sufferers and those with respiratory conditions are at increased risk. Cher Piddock, a nurse for the Asthma UK advice line, said: “With the hot weather and smog set to continue through the weekend, people with asthma are at increased risk of an attack. As around two-thirds tell us pollution triggers their condition, it’s important people with asthma always carry their inhaler, avoid exercising outdoors and keep windows shut whenever possible.”

Pollution problems in London have prompted the Mayor, Boris Johnson, to examine a new Spanish invention which turns buildings into pollution-absorbing sponges. Scientists at the Institute of Chemical Technology in Valencia have developed a substance that can be added to building surfaces such as glass, cement or ceramic tiles to remove pollution from the air by triggering chemical reactions. The substance, known as OFFNOx, uses sunlight, water and oxygen to transform the dangerous pollutant nitrogen dioxide into a harmless white coating that can be washed away by rain.