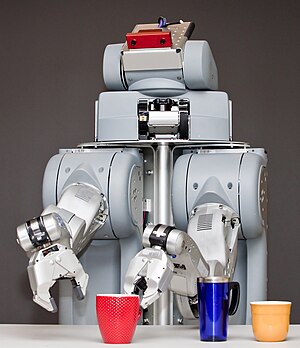 Imagine if every time someone wanted to develop a new piece of software, they first had to design and build a computer to run it.

Not only would this greatly add to the time and expense required for software development, but it would also mean that all of us consumers would have to own multiple computers. Well, that’s what it’s like in the field of robotics. Because there is no robot-equivalent of the PC or Mac, every time someone wants a robot that can do something new, a new robot has to be built from scratch. Wouldn’t it be easier if there were one standard robotic platform, for which people just designed new hardware or software? Californian robotics company Willow Garage seems to think so, which is why they’re giving ten of their PR2 robots to deserving research organizations.

The PR2 Beta Program is open to groups who plan on making use of the robot in existing or planned research projects. The groups will regularly share their findings with each other, and with the coordinators at Willow Garage. Everyone’s successes will be written into the PR2’s open-source software platform, called ROS (Robot Operating System), or built into new versions of the robot. Like the Linux operating system for computers, ROS will be available to anyone, anywhere, to use or to add to. Willow Garage hopes that the PR2 and ROS will become a common focus for the robotics community, wherein developers can learn from and build upon each others’ research, instead of working in isolation.