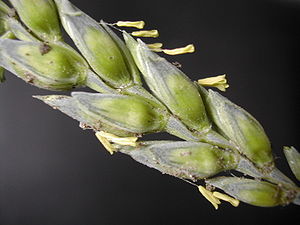 A laboratory milling device for improving stored grain management has been developed by Agricultural Research Service (ARS) scientists and an industry cooperator.

The system, called the “insect-o-graph,” can detect internal insects in wheat that are not visible to the eye or that cannot be detected by usual grading methods. The device, built by National Manufacturing, Inc. (NMI), of Lincoln, Neb., was based on ARS-developed technology.

ARS engineers Tom Pearson and Dan Brabec, in the Engineering and Wind Erosion Research Unit of the agency’s Center for Grain and Animal Health Research at Manhattan, Kan., developed the device, which uses electrical conductance signals to monitor wheat as it’s milled. If a seed containing an insect is crushed, an electrical spike occurs. The software counts the number of insects in a kilogram sample. This system can detect low levels of infestations such as five to 10 infested seeds out of 30,000 good seeds.