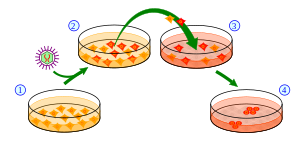 A new technique that allows blood to be made directly from skin cells has been discovered.

Until now to make blood stem cells, the building blocks for a variety human cells (called pluripotent stem cells) have been used as a steppingstone a process. This has proven largely inefficient, but research led by Mick Bhatia, scientific director of McMaster’s Stem Cell and Cancer Research Instituteat the Michael G DeGroote School of Medicine, has shown that making blood from skin can be achieved in a one step process.

The discovery was replicated several times over two years using human skin from both the young and the elderly to prove it works for any age of person.