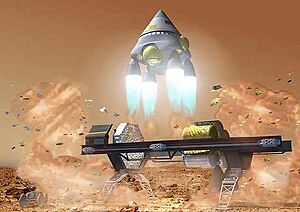 For the chance to watch the sun rise over Olympus Mons, or maybe take a stroll across the vast plains of the Vastitas Borealis, would you sign on for a one-way flight to Mars?

It’s a question that gives pause to even Dirk Schulze-Makuch, a Washington State University associate professor, who, with colleague Paul Davies, a physicist and cosmologist from Arizona State University, argues for precisely such a one-way manned mission to Mars in an article published this month in the Journal of Cosmology.

In the article, “To Boldly Go: A One-Way Human Mission to Mars,” the authors write that while technically feasible, a manned mission to Mars and back is unlikely to lift off anytime soon — largely because it is a hugely expensive proposition, both in terms of financial resources and political will. And because the greatest portion of the expense is tied up in safely returning the crew and spacecraft to earth, they reason that a manned one-way mission would not only cut the costs by several fold, but also mark the beginning of long-term human colonization of the planet.

Mars is by far the most promising for sustained colonization and development, the authors conclude, because it is similar in many respects to Earth and, crucially, possesses a moderate surface gravity, an atmosphere, abundant water and carbon dioxide, together with a range of essential minerals. It is the Earth’s second closest planetary neighbor (after Venus) and a trip to Mars takes about six months using the most favorable launch option and current chemical rocket technology.

“We envision that Mars exploration would begin and proceed for a long time on the basis of outbound journeys only,” said Schulze-Makuch. “One approach could be to send four astronauts initially, two on each of two space craft, each with a lander and sufficient supplies, to stake a single outpost on Mars. A one-way human mission to Mars would be the first step in establishing a permanent human presence on the planet.”

While acknowledging that the mission would necessarily be crewed by volunteers, Schulze-Makuch and Davies stress that they aren’t suggesting that astronauts simply be abandoned on the Red Planet for the sake of science. Unlike the Apollo moon missions, they propose a series of missions over time, sufficient to support long-term colonization.