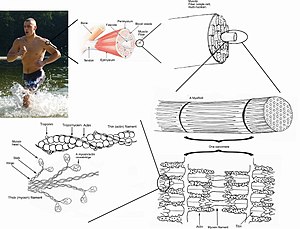 In a study that could eventually restore movement to humans’ paralyzed limbs, researchers at California’s Stanford University have used light to induce muscle contractions in mice. A gene derived from algae was inserted into the mice, encoding a light-sensitive protein which adhered to their nerve cell surfaces. Scientists then placed an “optical cuff” lined with tiny, inwards-facing LEDs around the mice’s sciatic nerves. By penetrating those nerves with brief, high-intensity bursts of blue light, they were able to produce muscle contractions similar to those that would occur naturally. The technology is called “optogenetics.”

Previously, electrical versions of the optical cuff have been used to cause muscle movement. These have even been tested on paralyzed human subjects, allowing them to walk for a few minutes. Unfortunately, the electrical cuffs caused the muscle-activating nerves to fire in the wrong order.