Twitter:
Home Innovation Pumping Up the Heat for a Climate-Friendly Future

Pumping Up the Heat for a Climate-Friendly Future 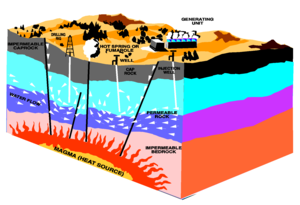 Making ground-source heat a cost-effective alternative to fossil fuels has long been a dream for countries that depend on energy imports and need to cut their carbon dioxide emissions. A team of businesses and researchers in Slovenia and Serbia set out to develop the heat pump technology that would make this dream a reality.

The chaos caused by a volcanic eruption in Iceland April 2010 and the dispersal of its ash cloud across European airspace was a reminder of the tremendous forces of nature that exist below the ground. Not all subterranean heat sources have such sinister power, however. Across Europe, there are plentiful sources of geothermal energy: heat stored in the ground which can be tapped to provide a renewable and inexhaustible energy supply. Using the right technology to access this power at varying depths and temperatures, we can use this heat to reduce our dependence on imported and climate-damaging fossil fuels.

Until recently, the technology to exploit geothermal energy in a cost-effective way has remained under-developed. However, in response to the growing economic and policy pressures to cut CO2 emissions and improve energy security, one company set out to change this state of affairs, with remarkable results.

The small spa-town of Lendava, Slovenia, draws on a deep geothermal well 1,500 metres below the ground to supply its district heating network. The 70 degrees Celsius water is used to heat schools, sports centres, shops, businesses and apartment buildings. However, once used, the water is still around 50 degrees Celsius: too cool to re-use for space heating but too warm to re-inject into the well (or dispose of in the local environment).

Nafta Geoterm, the firm that manages the well, was convinced it could make better use of its resource and reuse this ‘waste’ water. The solution, proposed by Professor Darko Gori?anec at the nearby University of Maribor’s faculty of chemistry and chemical engineering, was to devise a high-temperature heat pump that could reheat geothermal source water from around 40 degrees up to 80 degrees, at which point it could be reused for space heating. While many heat pumps on the market were able to heat water from around 25 degrees to 60 degrees, none could deliver the high temperatures (80-90 degrees) required for the type of heating system that is most common in Europe’s older housing stock: high-temperature radiators designed to be run from fossil fuel boilers.

With support for the cross-border, multi-sectoral partnership from the EUREKA Network, Nafta Geoterm drew together end-users, research institutions and manufacturing companies, based in Slovenia and Serbia. Many had worked together on projects since the days of the former Yugoslavia. As well as developing a heat pump for Lendava, they recognised the broader potential of their project: a new market for the wider exploitation of geothermal energy sources and waste industrial heat.