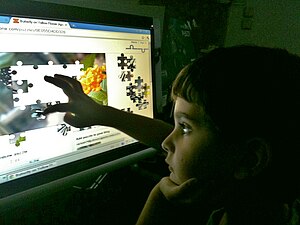 It would also be particularly useful for handwriting recognition

Touchscreens found in most mobile devices today use capacitance or resistance technology – fine for detecting input from a finger, but not so great when it comes to detecting how much pressure that finger is applying. However, this limitation could be about to change with news that Japanese touch screen manufacturer, Nissha, has licensed new technology that allows a touchscreen to detect pressure, even from a finger. This adds a third dimension to touchscreen interaction and opens up a raft of potential applications.

The licensing agreement concerns Peratech’s Quantum Tunnelling Composites (QTC) technology, which is used to create ultra-thin, low power force sensitive switches of any shape or size. Adding force sensitivity to touchscreens offers the prospect of adding the third dimension to touchscreen interfaces and could give users the ability to search deeper into a file structure simply by pressing harder, or control an avatar’s movement through a game more naturally. It would also be particularly useful for handwriting recognition in Asian markets due to the variation in line thickness in Asian scripts.