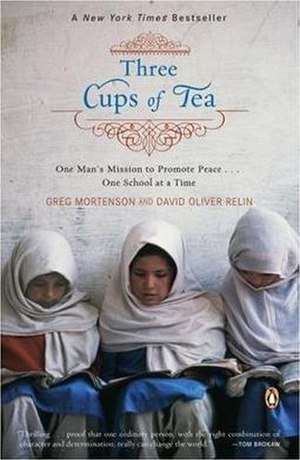 American humanitarian Greg Mortenson‘s first book — THREE CUPS OF TEA — has sold over 3.5 million copies around the world. It tells the remarkable story about his efforts to build schools in Afghanistan and Pakistan. When in 2008 the JOURNAL asked viewers what books should be priority reading for the next President, THREE CUPS OF TEA was among the top ten suggestions. Now, the book has become required reading for our senior military commanders and Special Forces in Afghanistan.

Greg Mortenson is the co-founder of the nonprofit Central Asia Institute. His charity arm, Pennies For Peace, helps raise money for his school-building efforts in Central Asia. THREE CUPS OF TEA has been on the NEW YORK TIMES bestseller list for over three years, and was named a TIME Magazine “Asia Book of The Year.”

Mortenson’s new book is called STONES INTO SCHOOLS: PROMOTING PEACE WITH BOOKS NOT BOMBS, IN AFGHANISTAN AND PAKISTAN.

As of 2009, Mortenson has established over 131 schools in rural and often violent regions of Pakistan and Afghanistan, where few educational opportunities existed before. These schools have provided education to over 58,000 children, including 44,000 girls.